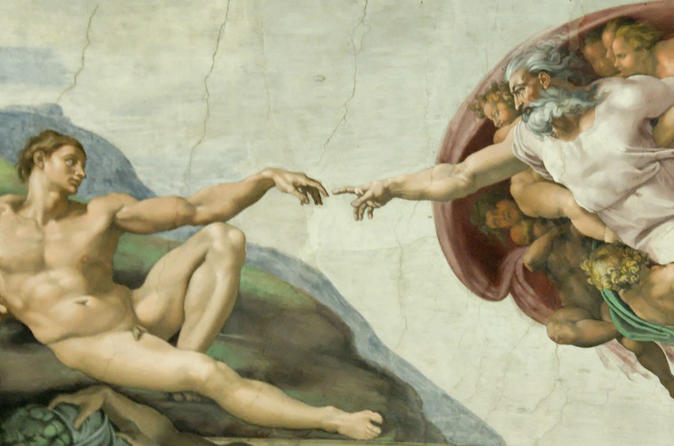 Skip the long lines and see the highlights of the Vatican Museums with your own personal local guide. See the magnificent Sistine Chapel and get inside the St Peter's Basilica.

Meet your local private guide at the Vatican Museums entrance, skip the long lines and start your journey in the Museums with the Pinecone courtyard, created by Bramante, that once connected the Pope's palace to the Villa Belvedere, today part of the museums. The courtyard is named after a 13-foot high bronze pinecone dated 1st Century b.C., originally found in the Ancient Roman area of Campus Martius, that stands at one side of the courtyard.
Walk through the Museo Pio Clementino to see many ancient Greek and Roman statues. In the octagonal courtyard you will see two of the most amazing sculptures in the Vatican collections: the Laocoon and the Apollo del Belvedere. In the Sala Rotonda, where the architecture is built after the Pantheon, you will admire Nero's basin (1st century), once in the Dumus Aurea. The giant basin is made of a special red marble coming from Egypt, called porphiry.
Afterwards you will walk through many galleries, including the Tapestries Gallery and the Maps Gallery, to finally reach the Papal apartments. Each room is decorated with frescoes by Raphael, in the same years when Michelangelo was decorating the ceiling of the Sistine Chapel. In the Raphael's Rooms you will see the famous School of Athens fresco, with the portraits of the greatest Italian renaissance artists: Leonardo Da Vinci, Michelangelo and Raphael himself.
You will now reach the Sistine Chapel. In this amazing hall, where the cardinals elect new Popes since more than 500 years ago, you will see the two greatest works by Michelangelo. The ceiling, with the famous Creation of Adam, and the colourful Final Judgement.
From the Sistine Chapel, you will go directly to the St Peter's Basilica, started in 1506 and completed in 1626. It is built over the place where, according to the Catholic tradition, St. Peter was buried. Over the tomb, you'll see the huge Baldacchino by Gian Lorenzo Bernini.
On the left side of the Basilica stands the sculpture that made Michelangelo's career take off: the Pietà, carved in white marble when the artist was just 23 years old.
After having seen all the Vatican highlights, leave the Basilica to finish the tour seeing St Peter's square, with his column layout projected by Bernini.
It's possible to book the tour only or add the pick up at your hotel by luxury car/van, or the return to your hotel by luxury car, or both.

Skip the long lines and see the highlights of the Vatican Museums with your own personal local guide. See the magnificent Sistine Chapel and get inside the St Peter's Basilica.