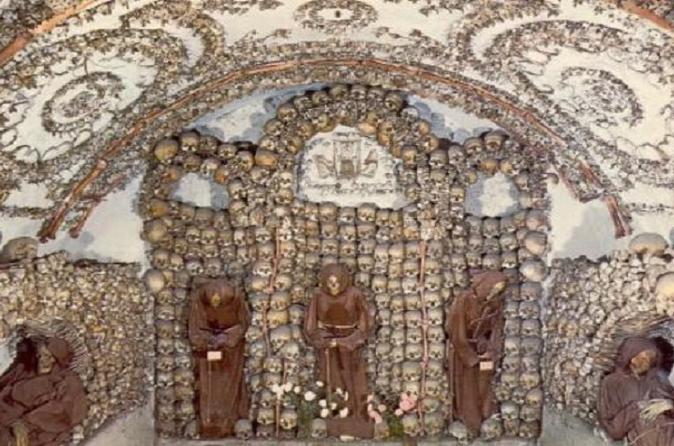 Important: Depending on different closing days, you will visit Domitilla’s OR Saint Sebastian’s OR Priscilla’s Catacombs.


The tour will guide you to the ancestral and underground area of Rome. The catacombs were used in ancient time as a burial area because it was forbidden to bury o cremate corpses in the city. The first spot to visit s the Church of Our Lady of the Conception of the Capuchins and its Famous Crypt. You will visit the main attraction which is definitely the Crypt, decorated with around 4000 Capuchins friars’ bones. The crypt is divided into five small chapels where there are the mummies of some friars in their typical vests. One the most important Catacombs are Domitilla’s which take the name from Flavia Domitilla. Archeological excavations conducted to discover a cemetery originally composed of different burial chambers.  The Catacombs of Saint Sebastian at the beginning were a pagan burial site. The area was reused as a cemetery. Christian even if at least in the initial burials, slaves and freemen were buried above all. Even though there are many 'poor' burials, there is no lack of monumental burials, which are located in the area called "la piazzola", a relatively large area, today underground, but probably originally open-air.The Catacombs of Priscilla in Via Salaria are the most important in Rome. Some popes were buried in these catacombs and more than 40.000 people. Different cubicula, little rooms with frescos representing Old and New Testament scened are still visible.