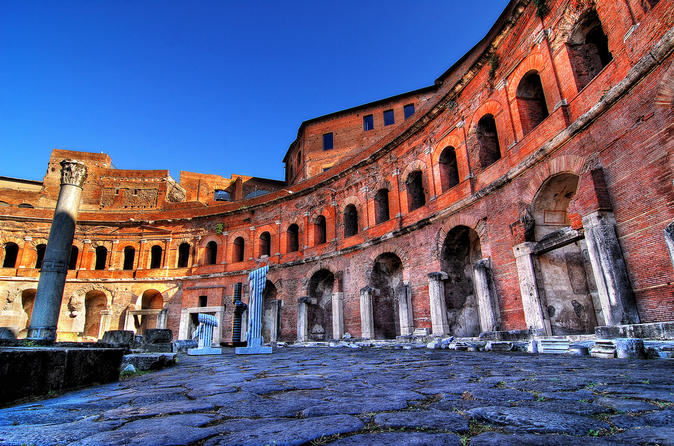 2,5 hrs private tour of an archaeological complex with absolutely unique characteristics in Rome.

A special guided tour of the “Trajan’s Market in Rome is one of the most interesting archaeological sites in Italy: Trajan’s Market in Rome. Excavated between 1924 and 1936, its restoration is one of the special achievements of Italy’s historic preservation. Built by the ambitious and successful general Marcus Ulpius Traianus (53-117 AD) they became the stone testament of a great Roman ruler. A fascinating guided tour of the most important commercial and administrative centre of the ancient times, almost intact, the Trajan’s Markets.
The Trajan’s Markets are located along Via dei Fori Imperiali and it represent a unique case among the remains of the ancient world, as it was a huge commercial centre developing on six floors.
The Markets of Trajan are an archaeological complex with absolutely unique characteristics in Rome. The monument has lived the evolution of the city from the Imperial Age to the present day: strategic administrative center of the Imperial Forum, aristocratic residence, military fortress, prestigious convent and barracks.
The complex, made of red brick and concrete, had six levels in which there was once up to 150 different shops and apartments, now the Trajan's Market hosts the Museum of the Imperial Forums referred the Markets of Trajan were an integral part.

The extensive complex of Roman buildings in brick, known as Trajan's Market, is miraculously come down to us from the heart of the ancient city, in close connection with the large squares of the Imperial Forums, and still is in the center of the modern city.

Today visitors can walk along the main shopping street, the Via Biberatica, or through one of the complex's corridors, along the rooms that once housed the tabernae. During the guided tour, visitors can have access to the high terraces of the complex where they can admire the underlying area of fori imperiali, one of the most extraordinary view of the eternal city. the guide will also explain the whole fori area from this peculiar perspective.

2,5 hrs private tour of an archaeological complex with absolutely unique characteristics in Rome.